The last week and a half has been tough.  It’s been tough enough that I’ve had a hard time figuring out a lighthearted way to talk about my last few weeks of racing.  That said, I wanted to write this before I get the results of my MRI this afternoon (want to know why I had an MRI? stay tuned …)

Let me back up a little though.  2013 is the first year that USA Cycling has created a “professional” classification for women and as a result the U.S. women’s pro peloton was invited to race Professional Road and Time Trial Nationals in Chattanooga, TN rather than Elite Nationals as we have in the past.  This was a huge honor and I was extremely excited to be part of the inaugural event.  I was also nervous since this would be my first foray into the domestic pro peloton this year after spending most of my spring abroad.  I had yet to even race my new Wilier Twin Blade and only had a rough idea of how the riders on other teams were going.

I spent the 4 or 5 weeks going into Nationals training and racing at home mostly against the Pro/1/2 Men with my teammie Rhae Shaw.  I even managed to ruffle a few feathers (sorry, not sorry).

I also raced the Mutual of Enumclaw Stage Race with the women.  I’ve been trying to win this 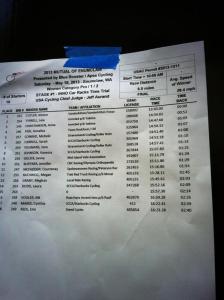 ding dang race for 5 years and I’ve never been able to do it.  Last year I won two stages and still got second solely due to letting the eventual winner take more time bonuses in the crit.  This year, I was determined to crush the TT to the point that I could afford t

o not win the other stages and not have to chase every time bonus.  Let me just say, goal, accomplished.  Over a super short course, I finished 27 seconds faster than last year and won the TT by over 50 seconds averaging about 28 mph.  With my cushion I was able to

play around in the crit and road race without having to stress about losing the GC.  It was so fun to reconnect with a lot of my local Washington and Oregon racing friends and to meet some new Canadian pals (watch out for these girls, they’re FAST).  I was happy to finally win the GC at this race and to go into Nationals with a little bit of extra confidence under my belt.

I left for Nationals on Tuesday and met up with my teammate Ruth.  We spent the week doing recon on the road and TT courses and trying to make new friends in Chattanooga.  We were suuuuper lucky to meet Jamie Ingalls of Hub Endurance who set us up with a home base, trainers, a second person to ride in our caravan vehicle, and even helped us find extra wheels for our wheel car. His hospitality was so above and beyond and I can’t thank him enough.

Niels and our other teammate Amy arrived on 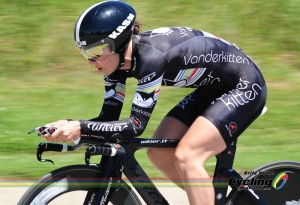 Friday morning and Saturday was the TT.  The TT was really my target and I then hoped to work for Ruth in the Road Race.  How do you write about a TT?  I went out hard but not too hard, I tried not to panic, I didn’t throw up in the first half of the race, I threw up just a little in the second half of the race, I caught my 1-minute girl, I didn’t crash, I didn’t get caught.  The course was rolling, breezy, a little technical, didn’t favor any particular type of rider, and was super fun.  I finished in 44:04.04 which was good enough for … 9th place!  I was so pleased to finish in the top 10 after a really marginal ride last year and I was extra pleased to be less than a minute and a half down from the winner, Carmen Small!

As pleased as I was with my time trial I had to move on right away to the road race.  Our plan was to protect Ruth and be smart with our matches since we only had 3 riders toeing the line. The race started out with three laps of an 11k technical circuit, two times up and over Lookout Mountain, and then three more laps around the circuit.  It felt like a crit followed by a road race, followed by another crit.  We mostly sat close to the front for the opening circuits and then Ruth and I moved up towards the very front on the run in to Lookout.  Once Ruth was close to the front the first time up the climb I sat in and monitored things from her hip.  When she slid back a little I pulled up next to her and then in front to try and protect her.  About 2/3 of the way up the climb there’s a short descent with a sweeping left hander.  By the time we hit this section I was in a lead group of about 12 riders.  I don’t know what happened but I somehow took myself out through the sweeper.

I hit the deck HARD on my left hip and immediately hopped back up to see that I’d broken my left shoe and left brake lever.  Neutral support was there immediately and used a toe strap to tie my foot back into my shoe.  My brake lever was flopping around but was still held on by the brake cable.  I got back on my bike and began furiously chasing through the dropped groups despite a throbbing hip and broken gear.

I chased with a small group back through the caravan catching the peloton about 7k before the next ascent of Lookout.  There was a break up the road and we made the snap decision to try to send me across on the next time up the climb.  Amy and Ruth were awesome and led me out into the climb so I hit it about 2nd or 3rd wheel.  I tried.  I tried so so so hard to stay with Evie’s bridge attempt up Lookout but I just didn’t have it.  I finished in a group of about 8 riders rolling in 17th.  I was and am still so disappointed in myself.  I finished 17th after crashing hard and burning a huge match chasing.  I feel like I disappointed my teammates, our sponsors, and all of my supporters.  It was such a stupid crash and it likely cost me a much better finish than I had.

The day after the race I woke up to find that despite having almost no road rash, my hip and thigh had swelled up to about twice their size and I had grown what appeared to be a small grapefruit under my skin.  I could barely sit, stand, or walk.  In fact all I really could do was feel sorry for myself.  I flew to Philly that Tuesday afternoon for the Philly Classic which was set to run on Sunday.  I had 5 days to work real hard to get rid of the swelling and the grapefruit.

By the morning of Philly I knew my concerted healing

efforts had failed.  I had accepted that the grapefruit and I were now in this together.  I even gave him a name and thought about letting the left thigh of my shorts out a little to accommodate him.

Alexander the Grape(fruit) and I went in to Philly with the sole goal of doing our job and helping out the team.  The plan was thwarted though when I got tangled up in a huge pileup towards the front of the race on the first lap.  I didn’t go down hard but I did go down right on Alexander’s face.  I was back up and on my bike almost immediately but by the second lap I was having shooting pain and numbness down my leg.  After the second time up the Manayunk Wall I dropped back to our team car and told our director what was going on.  He told me to go to the med tent.  race over.

I will not go into the nitty gritty of my injury because frankly I don’t know what it is.  I can still ride my bike but my left leg is pretty weak.  I had an MRI yesterday to try and determine the nature and extent of the damage and I’ll get the results today.

It’s hard to be lighthearted and funny when I’m feeling crummy but I am so grateful for the support of my team, family, community, and friends.  I’m supposed to head to NVGP on Monday and god willing I will be there either with or without Alexander.

Thank you to Billy Wynn of Cycling Illustrated and to Amara Edwards of Wheels In Focus for allowing me to use their photos.

1 Response to Fueled by Stubbornness