single speed is for everyone (a SSCXWC race report of sorts)

When I announced my impending retirement from pro racing along with mine & Niels’ intention to create the Northwest Women’s Cyclocross Project, I also stated my intention to race some single speed cyclocross and target SSCXWC as my “A” race for the season.  Although I was half joking, I actually did want a goal to work towards to keep me on the bike through the gloomy Seattle fall.   I retired from pro racing and went back to work full time; I did not retire from riding my bike or the joy of slipping and sliding around in the mud.

Retirement means different things to different people.  For me, continuing to race single speed was the perfect balance of having something to train for while participating in a subset of a sport that embraces everyone from pro racers to total beginners.  Also from a pragmatic standpoint, it rarely conflicted on our local race schedules with the race times for the junior and geared category women.

So what’s so great about single speed? I first tried it after being inspired by my friend (and NWCX Project sponsor) Kathleen. Kathleen is a single speeder (and sometimes Cat 3 racer) who founded and runs the CXsisters network. I’ve rarely seen her race out of a rad costume, and seeing her in a race always puts a smile on my face because her joy is palpable.  She’s a fierce advocate for parity in women’s cycling and finding joy and fulfillment in riding a bike.  Her goals in racing are arguably quite different from mine.  I’m competitive to a fault, data-driven, and love to win.  But circling back to what makes single speed so great, is that Kathleen and I get to line up together week after week (at least we used to before she moved to MA where she now races the super-inclusive Zanconato Single Speed Cyclo-Cross Trophy Series) and each find fulfillment in our own way in a race that has no restriction other than one f**king gear.  We both get to finish the same race happy and feeling like we put ourselves out there.

For me, racing single speed got me out of my own head.  I stopped worrying about my equipment and started to really feel the flow of racing cyclocross.  There were days where I would double up on geared and single speed races and my single speed laps would be faster than my geared laps.

This year at SSCXWC, I went into the race with pretty low expectations for having a notable performance.  I’d fallen on my mountain bike in early October and badly sprained my back. I’d then tried to return to riding and racing too soon which had resulted in me developing an excruciating case of ITBS.  I had raced a couple times in the weeks leading up to the race and I was feeling shaky at best.  Instead of stressing, I decided I was going to put on a costume, have fun, and if the opportunity arose I would race my f**king bike.

A lot of things had to and did go right for me to take the win in Portland.  First off, I found 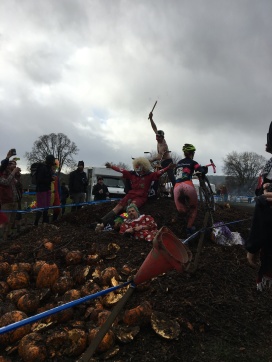 my bike quickly following the crazy cornfield le mans start and was able to be close to the front of the field early.  Second, I raced on a brand new bike and decided to gear down from my normal gear rather than pull the gears off of my other bike – this was the right choice given the heavy conditions.  Third, I’d remembered to bring dollars for the stripper bus shortcut (read about it on Anne-Marije Rook’s absolutely perfect SSCXWCXPDX Race Report) putting me into about 5th place half way through the first lap.  So despite a wrong turn on the second lap which shuffled me from the lead back to 3rd, I managed to put together a near perfect race.

This was almost certainly my favorite win of my
career.  It’s no secret that I was a just slightly better than mediocre pro cyclocross racer.  Although I had one pro win, it was (fairly) pointed out that it was basically a local field in the race that day. 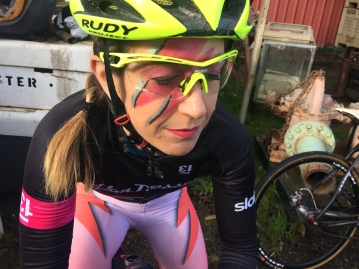 This win was everything I love about single speed.  I lined up between pro rider Mical Dyck (two-time SSCXWC champ) and a lady who I’m pretty sure I lapped twice.  At the end of the race, I high fived both of them and I’m confident we all had a great time and felt fulfilled.  I got heckled, I heckled back, I accidentally body checked a dude in the yoga ball pit, and I never stopped smiling.  All of this is what makes single speed so perfect.

Going back to single speed being for everyone; I know that people love to bicker about gear and who can and cannot/should or should not play.  I know that there are single speed purists out there who think there should be barriers to entry, who don’t necessarily love how many people are coming over to single speed, or are annoyed by those who split their time between geared and single speed races.  What’s the saying? A gentrifier is anyone who showed up five minutes after you.  While my opinions may not be everyone’s opinions, I want to hold my hand out to anyone who wants to try it.  I DGAF if you’re a beginner or a pro, if you zip tie the shifters on your geared bike, or if you have flat or curly bars.  I know I’m pretty new to single speed, this being only my fourth season doing it, but I am and always will be fiercely pro-inclusion.  I firmly believe that inclusion is in the spirit of single speed and cyclocross in general.

Last year I suffered a big disappointment when I lost the national title to Nicole Mertz who had never even raced single speed before.  It stung, but at the same time Nicole was the better rider that day.  The most deserving rider won, it wasn’t me.

This year, I took a moment to peek at who’s registered for the women’s single speed race at nationals (I won’t be racing) and I saw that Mindy McCutchon is signed up.  Mindy is an insanely talented rider and a much better cyclocrosser than I ever was or could ever hope to be.  I LOVE that someone who will contend for a good finish in the elite race is going to race single speed.  I hope it’s a competitive and exciting race; I hope that more and more elite women try racing with one gear.

So do you want to try getting rad in a SSCX race? Know that no matter what, this racing is for you and that I will support you and high five you at the finish!