The Upside of Injury

the Grapefruit has gained more celebrity than I’ve ever had. I think it’s kind of going to his head and I’m not going to lie, I’m getting a little jealous of all the texts and emails that I get asking how he’s doing.  He tags along everywhere I go and is a total prima donna who requires constant pampering.

A little more background on Alexander, he is what’s known as a Morel Lavalée Lesion which is an extremely rare type of hematoma / lesion that can be really hard to get rid of.  It’s cool though because if I can’t be good at Euro racing, at least I can have a French-sounding injury.  My awesome Doctor tried to aspirate him with the biggest needle known to man but stubborn old Alexander wouldn’t budge.  Since he couldn’t be drained I was told that in order for him to heal I had to stay off of my bike for at least two weeks.

I’ve been doing everything 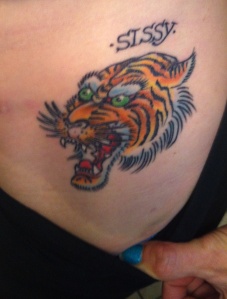 I can to get rid of him.  I wear a compression dressing almost 24 hours per day, I do epsom salt compresses on him, I take anti-inflammatories, I take arnica, I use Traumeel gel on him, I dress him up with Rock Tape, I even got a tattoo of a badass tiger on my hip to try and scare him off of my leg.* I wanted a quick fix and none of this has worked quickly however it is working slowly.  He’s getting smaller and a lot less painful.  I can actually sit down and fit into my tight jeans and shorts without feeling like I’m being stung by a million angry yellow jackets.

It’s no secret that when an injury happens to you it feels like it’s the longest and worst thing in the world.  When another rider is injured I always think “oh six weeks is nothing!” but here I am at the end of two weeks and I feel like I may never be able to pedal a bike fast again.

Despite being off the bike I have been allowed to swim which has been my saving grace.  Since I used to race triathlon I have a bit of swimming experience and a super extensive collection of fun swimsuits.  I also have totally atrophied t-rex cyclist arms which were sure to propel me through the water with ease.

So what is the upside of injury?

For one, I have been able to do a lot more around the house with Niels.  No, I still haven’t scooped the litter box because cat poop is gross.  I have however helped with our awesome garden.

I also have been able to spend a lot more time with one of my best friends, Sharon. 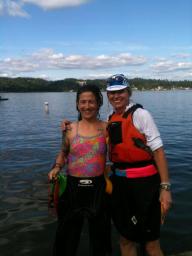 Sharon was even kind enough to escort me in her kayak in an ill-conceived nearly 3 mile swim across Lake Washington. She was then kind enough a couple of days later to escort me to coffee after I threw my back out from swimming too much 😦 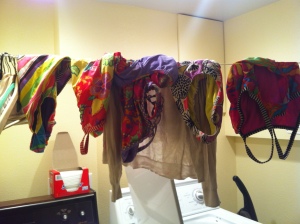 Also with swimming I am doing a lot less laundry.  So instead of a constant laundry explosion all over our house, I just have a suit or two hanging in the laundry room. 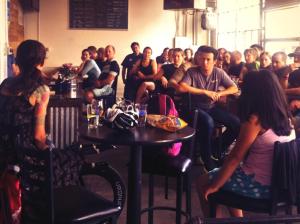 Finally, the coolest thing I’ve gotten to do with all of my spare time is to speak at an event at Peddler Brewing that was put on by my favorite local bike shop, Bikesport.

I was overwhelmed by the turnout.  The place was at capacity and they were actually having to turn people away.  I got to hang with Paralympic gold medalist  Meg Fisher who is the COOLEST and I met and hung out with #1 Vanderkitten fan, Savannah who is going to be my new riding buddy come Cyclocross season!

Today’s the day I get to get back on my bike and try to get back into a training routine.  I’m still targeting Cascade Classic even if a slightly deflated Alexander the Grapefruit is still tagging along.

*JK it’s a matching sisterhood tattoo with my #1 lady, Mimi