So I realize that I haven’t updated my blog with anything about any ACTUAL racing since October.  I’m no longer a triathlete so I no longer have to give blow by blow reports of every minute of every race that I do (sorry triathlete friends, love you, but some of you are wordy!)

The long of the short of it is that I came into the season with the goal of earning one single UCI point and I actually managed to walk away with 18.  I know I should be really happy with this achievement and for the most part I am but I still feel like I have a long way to go to be at the level I want to be at in cross.

I earned my first points at LA Spooky Cross weekend which was put on by the unbelievable Dot Wong who is literally one of the most kind and tireless supporters of cyclocross and women’s cycling development that I’ve ever met.  I finished 8th both days walking away from the weekend with 8 points. 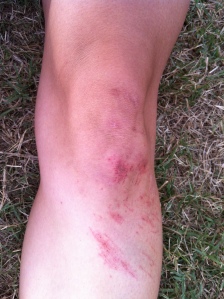 I know I should have been happy but I left feeling like I hadn’t raced well.  I crashed pretty hard in a loose corner and tore up my knee and then fell on the stairs on the same knee on the second day.  Both days I had multiple opportunities to attack my group of 4 and was a bit of a chicken and finished last in my group.  Sometimes I seem to forget that you can’t win if you’re afraid to lose.

It was right around this time that my coach called me and told me that he was quitting coaching to become a tycoon or something of the sort (apparently there’s more money in finance than being a cycling coach?!) I was really scared to hire a new coach.  My coach (literally) has one of the largest heads that I’ve ever seen (presumably to fit all of his cycling filled brains) and all of the coaches I interviewed appeared smart and knowledgeable but with normal sized craniums.  I was worried!  After a bit of research and some good vibes I decided to start working with Kendra Wenzel of Wenzel Coaching.  Kendra coaches some of the coolest and most talented ladies I know and I am certain that she can make me way cooler and more talented!

Next up was some local racing before heading to Iowa for Jingle Cross Rock.  Unfortunately, the weekend before Iowa I was racing Woodland Park CX, one of my favorite races of the year when I made a really dumb pass around a dude from the race in front of me and completely took myself out when I misjudged the angle and height of a root.  I landed hard on my pelvis and had to be taken to the hospital to make sure it wasn’t broken.  Luckily it wasn’t broken but I could barely walk for several days.  Even a month later my pelvis is still tender to the touch and hurts if I try to lay on it at night. 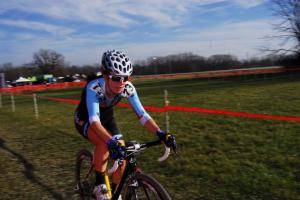 I went into Jingle Cross with appropriately low expectations since I was starting the weekend only 5 days off of my crash.  I managed to walk away with a few more points and some sweet photos thanks to Doug Reid from my awesome sponsor cyclocrossracing.com.  The courses were fairly technical and had a GIANT runup on days 1 and 3 and a long off camber descent on days 2 and 3.  I was extremely thankful for my Rolf Prima wheels and FMB Super Mud tires which kept me glued to the slippery off camber sections.

Next up was Bay State CX which was no joke, one of the most fun courses I have ever ridden.  There were tons of twisty off camber sections, 2 sets of stairs, some single track and a nasty little runup on the first day.  I went into the races feeling oddly relaxed and rode my way into 7th on the first day, my best ever UCI finish.  The second day wasn’t quite as good as I made some silly mistakes which cost me another top ten finish when I lost the sprint for 9th against my group of three, coming up 11th. 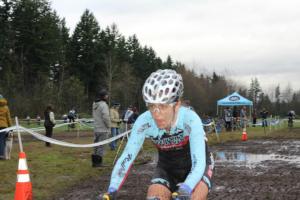 Next up was the WA CX state champs.  I like to support this race since it’s historically been really under-attended with sometimes as few as 4 women taking the line in the elite race.  The course was really boggy and muddy with tons of twists and turns.  I had a little bit of a rough start and found myself fighting from the back in the first 1/4 lap.  Amazingly though I was able to take the lead fairly early, maybe only half way through the first lap as a lot of women were sliding out getting stuck in the mud and I was lucky enough to choose good lines and stay upright.  I concentrated on riding hard where I could and choosing good lines.  I didn’t take unnecessary risks that could potentially cost me more time than they would earn me.  I bobbled once in the deep mud on the last lap and lost 5 – 10 seconds but was still able to come up with the win which was cool for me and my sponsors who have been so great to me this year.

Next up was Bend USGP.

Every year that I have raced cyclocross I have ended my season in Bend, Oregon on what is essentially the same course from year to year.  The first two years it was at Nationals and the last two years was the USGP.  Bend is my cruel mistress.  Year to year I keep going back to her even though she never shows me any love.

In 2009 I had literally upgraded to Cat 2 the week before and decided to hop in the elite race.  It didn’t end well.  I’ll leave it at that.

In 2010 I was at the bottom of this pig pile walking away with a concussion, broken shoe, broken bike parts, and a lot of scrapes and bruises. I still tried to do the elite race and was so beat up that I was pulled after only 2 or 3 laps.

Last year I was having an okay first day until I crashed 4 times on the last lap, giving up 5 places.  On the second day I rolled a tire and by the time I made it to the pits, I called it a day ending my season with a DNF.

It’s almost as if I want to end my season on a disappointing note.  This year was almost no different.  On the first day I had a good start until I didn’t.  My foot wasn’t clipped in even though I thought it was and ended up slipping off the pedal almost taking me and several other women out.  I was near last place in the first minute of the race.  After that, I was just fighting my own brain. I couldn’t clean any of the sections that I was riding smoothly in warmup and I never felt like I was able to push myself.  I finished a disappointing 24th and wanted to pack it in and not race the next day.  Sunday I decided to take the line and actually felt much more relaxed.  I didn’t care about how I finished, I just wanted to feel like I was able to conquer this course.  I still didn’t finish as well as I know I can but I feel like I finally started to figure this race out.  I was able to easily ride all but one technical section (Niels said only 4 women were able to smoothly ride the one ride/runup) and I was consistently choosing good lines.  I finished 18th on day 2.  Still not great but I felt like I rode well and really that’s what’s important.

So that’s the end of my season.  There’s a couple more small CX races in Washington this year but I’ve decided to draw the line in the sand and start recovering and training for road.  If there’s one thing that this last weekend taught me is that I am tired, not necessarily physically but certainly mentally.  I need to start getting ready for road and get back on a consistent training schedule that doesn’t involve always recovering from or prepping for another race.  I’m disappointed to not be toeing the line at nationals this year but I also know I’m not in a place physically or mentally where I can really be a contender there so it will have to wait for another year.

I did want to add one quick post script to my last post on sportsmanship. I received more views and feedback from that post than anything I’ve ever written. Frankly I usually assume no one reads what I write.  I’m actually fairly certain that a lot of the traffic I get on this blog are people who are looking for the other Jessica Cutler even though I’m pretty sure I’m cooler than her.

I wanted to say I really appreciate all of the positive feedback that I got as well as the criticism.  I apologize if any of my post came across as passive-aggressive or (ironically) unsportsmanlike. It is possible that I should not have used such specifically identifiable incidents to illustrate my point.  While I had been thinking about writing about sportsmanship for quite some time I did allow a specific incident that hurt my feelings to spark and influence that post.  I don’t think any woman in the Washington cyclocross scene is a bad, mean, or vitriolic person and we all make errors in judgment (I’ve made several today already!) I just hope that we can all try to treat each other with kindness and respect both in victory and defeat.

1 Response to season wrap and a quick post script