closing in on the point

One month into cross season and I’m feeling stronger every race. 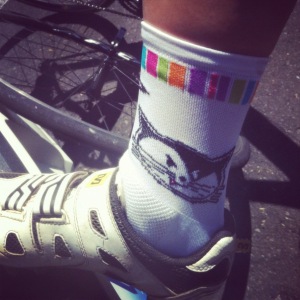 for Vanderkitten, aka the cutest team in pro racing, stayed with me and Niels for a few days and even gave me the coolest thank you gift ever.

At Cross Vegas, It was approximately 173 degrees out and -17% humidity during the race. (oh you didn’t know there was such thing as negative humidity?  try racing Cross Vegas, it’s true).  I lined up in the back with call up number 51 out of 60.  Of course. Luckily I lined up next to Robin who I knew would find her way come hell or high water to the front group.  The start was so fast but I just tucked in behind Robin while she cleared the path to the lead group.  1/2 lap in, I was in the front group of ~25 women.  As women continued to get shelled I continued to hang on. I was even next to Meredith Miller for a second!  I knew how long the course was plus we’d done an opening prologue loop so I was sure we were doing 4 laps.  I was mentally prepared for 4 laps.  And then after 3 laps I saw the board read “2 to go.” fuck.  Our pack splintered in the last two laps and I was hanging in no-man’s land about 5 seconds back from Mical Dyck.  On the last lap, Jono was screaming at me “there’s your girl! go get her!” Niels was yelling from the pits “go get her Jess!” However what I wasn’t understanding was that Mical was sitting in 15th place which is the last place that gets any points in a C1 race. I didn’t catch her. I finished 16th, 5 seconds away from my first ever UCI point but still much better than I’d expected.

The rest of Interbike was awesome.

After the fancy club we went to another party at the punk club and even street-teamed it up a little bit for the Vanderkittens!

Two weekends ago I went down to Portland to try and win some races since I’m pretty sure Courtenay won’t let me win a race up here in Seattle. 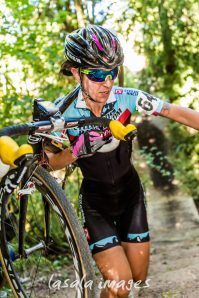 What I didn’t foresee was that Jade would also not let me win a race down in Portland. I walked away with a 2nd at Fazio Farms and a 4th at the Battle at Barlow.  I also walked away with the only runup picture of myself in the history of my cyclocross career where I don’t look like a complete dingus.  (txs Matt Lasala!).

To bring things completely up to date, last Saturday was Starcrossed, a Seattle staple and actually the first CX race I ever watched.  I’ve raced it every year since I started racing.  Up until this year it was a UCI sanctioned race but this year it’s simply part of the MFG local series.  However, Zac and Terry still made it a first class event with a great course and tons of fans and vendors.  I haven’t done a single MFG race with the 1/2 women so I started in the very back and went into the dirt sitting about 15th wheel.  Not good.  The first lap I fought hard to get around one rider at a time as I was getting increasingly panicked watching the front of the race ride away from me.  After the first lap I had worked my way into maybe 5th place.  I saw Jenni and Kari sitting about 10 seconds up from me and I attacked around two more ladies to try and catch them.  I dangled just seconds back from the two leaders for another half lap before I was finally able to make contact.  I sat on for a minute until Kari gapped Jenni and I knew if I wanted any shot at winning this thing I needed to go now.  I attacked Jenni and fought my way onto Kari’s wheel.  I sat on for another half lap before I attacked Kari and rode away to take the win!  Apparently though, I’m a diminutive rider because the announcer didn’t even know I was winning until 10 minutes after the race had ended.

I got to do my first post-race interview which was awesome and left me thinking both “do I really sound like that?” and “so that’s what I would look like with a unibrow.”

Winning StarCrossed was so so cool.  It’s obviously a different race this year without Katerina Nashes, Helen Wymans, and Sue Butlers of the world here to compete but it felt like a step in the right direction for me.  I came out on top over women who have earned UCI points and who have had top finishes at the national level.

Niels and I head to Fort Collins for the second USGP of the season this weekend.  This time I get two days to chase that one elusive UCI point.  My 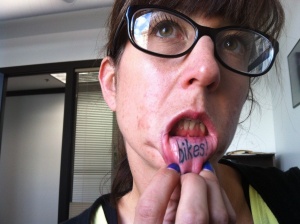 plan is to intimidate everyone at the start line with my sweet bike tattoo and then attack like the diminutive whisper of a rider that I am.