off with a bang

I’m sitting in my office waiting for Niels to pick me up to head down to California for the 4 day Sea Otter Stage Race.  It’s my first full stage race with a majority pro/elite peloton and I’m feeling pretty good.  I’m nervous and I think totally realistic in my expectations but I’m still just feeling good and excited.

I have no illusions about being able to race like I’ve been racing against these girls and I’m sure I’ll eat my share of humble pie while I’m down there but I think I can hang and maybe even be just a little bit aggressive.

This weekend was a real confidence booster. I had a fairly easy training week last week with all of my workouts been fairly short VO2 and higher type efforts (aka riding up madrona in the aerobars at 12 mph looking like a total dip).

Saturday I had two TTs up North.  The first was the Skagit Valley TT, an 8 mile out and back with a couple rollers in the last mile and a half.  I did real shitty at this race last year finishing in ~20:30.  This year my goal was to go a minute faster which is pretty ambitious but also the conditions were a lot better.

I woke up with a real bad stomach ache and immediately was totally crabby and petulant towards Niels because, you know, me having a stomach ache was totally his fault.  Despite my childish fits about not wanting to race and hating TTs I still managed to get in a decent warmup and drag myself to the line.  My stomach was a bit better by the start and I had the ridiculous idea to actually follow my coach’s pacing plan and not burn 90% of my matches in the first 3 minutes of the race.

out really controlled chasing my 30 second girl, Michele (who has been my TT idol since I started racing bikes).  Amazingly, a mile and a half into the race I wasn’t totally giving up and was able to start slowly ramping up the effort.  By the turnaround I had already caught my 30 second and 1 minute carrots and was closing in on my 1:30.  I made the third catch just before the little kicker about a mile and half before the finish.  I knew I was having a really good race.  At the hill I stayed in the aerobars and just railed over the crest.

At the top, I saw my 2 minute girl and made it my goal to catch her by the finish.  I made the catch just after the 1km sign.  I was totally tanked.  I had a hard time keeping the pressure on for the last minute but when I looked down and saw my garmin was still under 18 minutes I found one last match and burned it to the finish.  I finished in 18:08, 48 seconds up on second place (a pro, yo) and close to 2 minutes on third.

I was snotting and choking all over my bike by the end but I’m so pleased with the result and with how comfortable I’ve been on my TT bike.

After the race Sharon and I went over to the afternoon’s hillclimb course to drive it and determine which bike to use.  I had been told by coach to ride the TT bike so that was my plan but I may or may not have brought my road bike juuuuust in case. 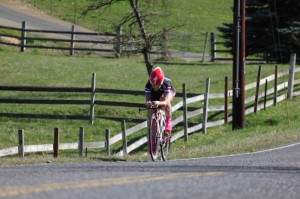 I went pretty much full throttle from the gun.  I tried to stay in the aerobars up the first kicker.  I gave up the ghost

on that plan exactly 2 seconds into the climb.  Once I hit the rollers I was able to be back in the bars and moving pretty well, hitting speeds over 25 mph on a few occasions.  I sprinted up the final kick and saw 5:5X on the clock.  I railed across the line for the win and the only female time under 6:00, finishing in 5:57.  I was also the 8th overall finisher. 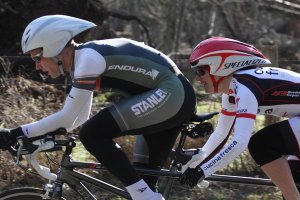 Here’s a bonus picture of me and Niels doing the SVTT last year on the tandem.  Please note the look on my face.  Yup.

Sunday I opted for a hard solo ride rather than doing the road race back up in Bellingham. It’s all good though because Courtenay took the win for the team!

Obviously time trialing well does not equal road racing well but I think I’m ready to step it up and race with the ladies I’m going to face this weekend.

One little post-script.  After my last post I have gotten tons of nice emails and people approaching me to offer their support regarding the negative vibes my team and I have been getting.  This made me realize two things.  One, that despite a few debbie downers and negative nancys the local women’s peloton is extremely kind and supportive and two, people actually read this blog which is super cool.

Thank you to everyone for their support and kindness.  I will try to not disappoint this weekend!

Thanks as always to Kevin Tu for the awesome photos!

8 Responses to off with a bang